This enlivening and pleasant call, which is full of His love and affection, attracts the man’s attention to itself so deeply, and gives him joy, happiness and spirituality, that does not match any other bounty.
Yes hearing the call of the beloved one, is a call filled with love and mixed with grace which causes the people of Paradise to be thoroughly rejoicing, a moment of which is superior to the whole world and whatever  exists in it.
A tradition narrated from the Prophet of Islam (S) indicates that he said:
“While the people of Paradise are busy enjoying the bounties of
Heaven there will appear a light above them”.
This is the light of Allah which is cast upon them and at the same time a
call will be heard saying: ‘Peace and greeting on you, O’ the people of Paradise!’
And this is the same thing which has been mentioned in the Qur’an. It is here that the view of Allah attracts them so strongly that they neglect His all other things and, in that state, they forget the whole bounties of Paradise.
It is here that the angels come out from every door and say: ‘Peace upon you’.”
Yes, the ecstasy of the intuition and presence of the Beloved and the visit of the Lord’s Grace are so delightful and gratifying that a moment of which is not equal with any blessing, even with the whole world.
The lovers of visiting Him are so that if this spiritual gift might be ceased from them, they would die. Amir-ul-Mu’mineen Ali (as) in a tradition said: “If I remain walled from the visit of the Lord for a moment, I will die.”

It is interesting that the apparent of the verse is that this greeting of Allah unto the believers in Paradise is a direct greeting without any intermediator.
It is a greeting from the Lord, Allah, the greeting which originates from His special Mercy, i.e., the rank of His specific Mercy, and all grace and favours are gathered in it. Oh, what a blessing it is!
In principle, Paradise is ‘the Abode of Peace’, as Surah Yunus, No. 10,
verse 25 says: “And Allah does call mankind to the Abode of Peace…”
And the people of Paradise, who are the dwellers of this abode, will sometimes face with the angel’s greeting.
At the time of arrival into Paradise, the angels arrive to them from every door and say:
“Peace (be) upon you (saying) that you persevered in patience! (And
now) how excellent is the Ultimate Abode.”
And sometimes the dwellers of ’A‘raf call them and say:
“…Peace be upon you!…”
And sometimes they will be faced with the angels’ greeting after entering
into Paradise: “…and the warders thereof say unto them: ‘Peace be unto you…”
Sometimes, at the time of taking their souls, this greeting is delivered to them from the side of the angels of death. They say: “…Peace be upon you! Enter the Paradise because of what you used to do.”

And sometimes they themselves greet each other. And, in principle, in their greeting there is ‘Peace’, the Qur’an says: “…their greetings therein is: ‘Peace!’.”
And, finally, the superior and above all of these is the greeting of Allah:
“‘Peace’: is the word from a Merciful Lord (for them).”
Briefly speaking, there will be heard there neither a vain word nor a sinful thing. There will be only ‘peace’ and ‘peace’. The Qur’an says: “They shall not hear therein vain or sinful discourse,”
Of course, it is not a greeting in mere pronunciation, but it is a greeting the effect of which penetrates in the depth of man’s soul and makes it thoroughly full of tranquillity, peace, and health. See comment Surah 36 Yasin 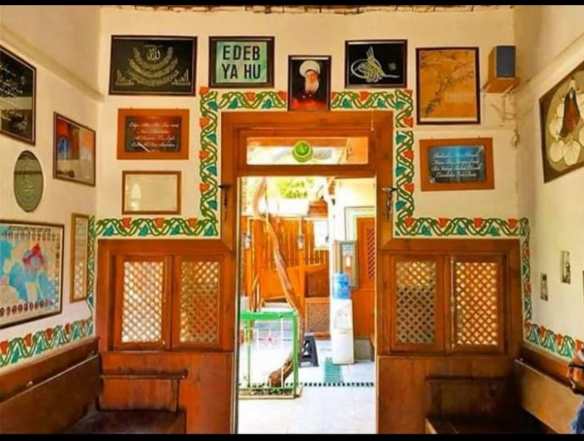