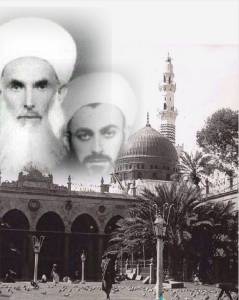 Sheikh Nazim states: “No one ever had the privilege of making seclusion with his Shaykh. I had the privilege of making a seclusion in the same room with my Shaykh (Abdullah Daghestani) in Madinah al-Munawwara. It was in an ancient room near the Prophet’s Holy Mosque. It had one door and one window. As soon as I entered the room with my Shaykh, he blocked the window by boarding it up. He gave me authorization to leave the room only for the five daily prayers in the Holy Mosque of the Prophet .”

. “I was ordered by my Shaykh to keep the practice, Nazar bar Qadam, ‘Watching the Step,’ when I walked to the prayers. By disciplining and controlling the sight, this practice is a means to disconnect oneself from everything except Allah, Almighty and Exalted, and His Prophet .”

. “My Shaykh never slept during that seclusion. For one year I never saw him sleeping. He never touched food. We were given one bowl of lentil soup and one piece of bread each day. He would always give his share to me. He only drank water. He never left that room.”

.”Day after day and night after night my Shaykh sat reading Qur’an by the light of a lamp, making Dhikr and raising his hands in dua. For hours he would make du`a (supplication) and one du`a never resembled another. Each one was different from the other and throughout the whole year, he never repeated the same du`a. Sometimes I was not able to understand the language he was using in the du`a because it was a heavenly language. I could only understand these du`as by means of the visions and inspirations that came to my heart.

.”I didn’t know when night left and day arrived except by the prayers. Grandshaykh `Abdullah never saw the light of day for one whole year, only the light of the candle. I would see the daylight only when I went out for the prayers.”

.”Through that seclusion I was raised to different levels of spirituality. One day I heard him saying, “O Allah give me the Power of intercession, from the Power of Intercession You have granted Your Prophet , to intercede for all human beings on the Day of Judgment to lift them up to be in Your Divine Presence.” As he was saying that I was in a vision experiencing the Judgment Day, and Allah, Almighty and Exalted, was descending on His `Arsh (throne) and judging people. The Prophet was on the Right Side of the Divine Presence. Grandshaykh was on the right side of the Prophet and I was on Grandshaykh’s right side.”

.”After Allah had judged the people, he authorized the Prophet to intercede. When the Prophet had interceded and finished, he ordered Grandshaykh to give his blessings and to lift the people up with the spiritual power that he had been given. That vision ended as I heard my Shaykh saying, ‘Alhamdulillah, Alhamdulillah, Nazim Effendi, I got the answer.'”

.”These visions continued. One day he told me after I returned from Fajr prayer, ‘Nazim Effendi, Look!’ Where should I look, up, down, right or left? It came to me look at his heart. As soon as I looked at his heart a great unveiling occurred to me and I saw Sayyidina `Abdul Khaliq al-Ghujdawani (q) appear in his physical body and tell me, ‘O my son, your Shaykh is unique. No one like him has ever come before.’ Then he invited Grandshaykh and me to come with him.”

. “Immediately we saw ourselves with Sayyidina `Abdul Khaliq in another place on this earth. He said, Allah, Almighty and Exalted, has ordered me to go to that rock,’ and we were following him to a rock. He said, ‘Allah has ordered me to hit that rock.’ When he hit the rock an incredibly powerful stream of water came gushing forth from that rock, the like of which I had never seen before. Sayyidina `Abdul Khaliq said, ‘That water is coming out today and is going to continue to pour out like this until the Judgment Day.’

. “Then he said, ‘Allah Almighty has told me that He is creating from every drop of this water an angel of light, which will be praising Him until Judgment Day. And He has ordered me by saying, ‘O My servant `Abdul Khaliq al-Ghujdawani, your job is to give every angel its name. You cannot use any name twice. You must name each one with a different name and count their praises. You will divide the rewards of their praises among the followers of the Naqshbandi Order. That responsibility is on you.’ Then that vision ended. I was so attracted to Sayyidina `Abdul Khaliq al-Ghujdawani and amazed by his incredible task.”

.”Visions continued to pour on me in similar fashion. In the last day of our seclusion, after Fajr prayer, I heard a voice outside the room crying. I heard one great voice and many smaller voices like the voices of many children crying. That crying did not stop, but I was unable to go and see who was crying because I had no permission. The sound of crying kept increasing and continued for hours..

“Then I saw a vision that Satan and his soldiers were encircled with a heavenly chain that prevented them from reaching my Shaykh and me. That vision ended. Then Grandshaykh said, ‘Alhamdulillah, the Prophet is happy with you and I am happy with you.’ Then he put his hand on my heart and I immediately saw the Prophet and 124,000 prophets, 124,000 Companions, 7007 Naqshbandi Saints, 313 Exalted saints, the five Qutbs and the Ghawth. All of them were congratulating me and they each poured into my heart their divine knowledge. I inherited from them the secrets of the Naqshbandi Order and the secrets of the 40 other Orders.”