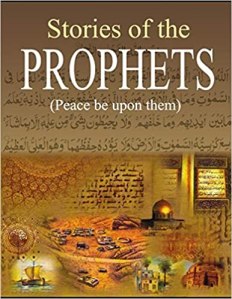 Tales of the Prophets is any of various collections of stories adapted from the Quran and other Islamic literature, closely related to exegesis of the Qur’an. One of the best-known is a work composed by the Persian author Abū Ishāq Ibrāhīm bin Mansūr bin Khalaf of Neyshābūr (a city located in Khorasan, Northeast Iran) the 12th century AD (AH 5th century); another was composed by Muhammad al-Kisai in the 8th century AD (AH 2nd century); others include the Ara’is al-Majalis by al-Tha’labi (d. 1035, AH 427) and the Qasas al-Anbiya by Ibn Kathir (d. 1372, AH 774). The narrations within the Qisas Al-Anbiya, are not about historical accuracy, but rather about wisdom and moral teachings.

Because the lives of biblical figures—the Muslim prophets or أنبياء anbiya—were covered only briefly in the Qur’an, scholars, poets, historians, and storytellers felt free to elaborate, clothing the bare bones with flesh and blood. Authors of these texts drew on many traditions available to medieval Islamic civilization such as those of Asia, Africa, China, and Europe. Many of these scholars were also authors of commentaries on the Qur’an; unlike Qur’an commentaries, however, which follow the order and structure of the Qur’an itself, the Qiṣaṣ told its stories of the prophets in chronological order – which makes them similar to the Jewish and Christian versions of the Bible. 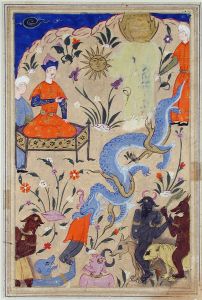 The Qiṣaṣ thus usually begins with the creation of the world and its various creatures including angels, and culminating in Adam. Following the stories of the Prophet Adam and his family come the tales of Idris, Nuh, Shem, Hud, Salih, Ibrahim, Ismail and his mother Hajar, Lut, Ishaq, Yaqub and Esau, Yousuf, Shuaib, Musa and his brother Aaron, Khidr, Joshua, Josephus, Eleazar, Elijah, Samuel, Saul, Dawud, Sulaiman, Yunus, Dhul-Kifl and Dhul-Qarnayn all the way up to and including Yahya and Isa son of Maryam. Sometimes the author incorporated related local folklore or oral traditions, and many of the Qiṣaṣ al-‘Anbiyā”s tales echo medieval Christian and Jewish stories.

During the mid-16th century, several gorgeously illuminated versions of the Qiṣaṣ were created by unnamed Ottoman Empire painters. According to Milstein et al., “iconographical study [of the texts] reveals ideological programs and cliché typical of the Ottoman polemical discourse with its Shi‘ite rival in Iran, and its Christian neighbors in the West.

God made the mountains and the seas. He made all the animals. He made the heavens and the stars. He made the sun and the moon and He made the angels. Then Allah decided to make a man. He called this first man Adam. He taught him many things so that Adam had more knowledge than the angels. There was one Jinn, called Iblis, the Devil. Iblis tried to compare himself to Adam. He believed that he was more honorable than Adam. Therefore he abstained from prostrating even though Allah had commanded him to do so. Adam was surprised by this creature, Iblis who abhorred him without even knowing him and who imagined himself better than Adam without having proved that he was worthier. Allah gives His commissioned creatures’ absolute freedom even to the extent that they can refuse His commands. Allah grants them the freedom of denial, disobedience, and even disagreement with Him. His kingdom will not diminish if the disbelievers do not believe in Him nor will it be extended if many people believe in Him.

Read here Stories of the Prophets