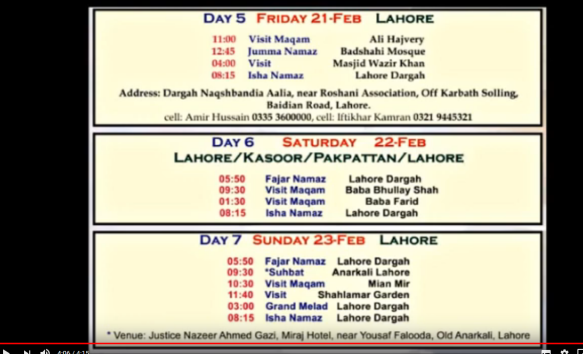 Back to Part 1 of Pakistan Tour 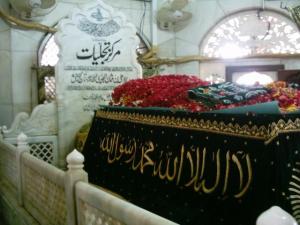 Abu ’l-Ḥasan ʿAlī b. ʿUthmān b. ʿAlī al-Ghaznawī al-Jullābī al-Hujwīrī (c. 1009-1072/77), known as ʿAlī al-Hujwīrī or al-Hujwīrī (also spelt Hajweri, Hajveri, or Hajvery) for short, or reverentially as Shaykh Syed ʿAlī al-Hujwīrī or as Dātā Ganj Bakhsh by Muslims of Pakistan and India was an 11th-century Iranian Sayyid Sunni Muslim[4] mystic, theologian, and preacher from Ghazni, who became famous for composing the Kashf al-maḥjūb (Unveiling of the Hidden), which is considered the “earliest formal treatise” on Sufism in Persian.[5] Ali Hujwiri is believed to have contributed “significantly” to the spread of Islam in South Asia through his preaching especially in the Punjab,[6] with one historian describing him as “one of the most important figures to have spread Islam in South Asia 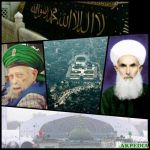 Data Darbar (also spelt Data Durbar; Urdu: داتا دربار‎), located in the city of Lahore, Punjab, Pakistan is the largest Sufi shrine in South Asia.[1] It was built to house the remains of the Muslim mystic, Abul Hassan Ali Hujwiri, commonly known as Data Ganj Baksh, who is believed to have lived on the site in the 11th century CE. The site is considered to be the most sacred place in Lahore,[2] and attracts up to one million visitors to its annual urs festival.

The shrine of Hujwiri is housed in a Mughal era tomb crafted of carved white marble. The tomb is surrounded by a massive marble courtyard, while a new educational institution at the shrine complex utilizes modernist architecture.[9]

The site is considered to be the most sacred place in Lahore.[2] The shrine has emerged a major economic, political, and social centre in Lahore,[1] and is one of the only places in Lahore where the extremely rich and extremely poor share space together.[1]

It is widely believed among devotees that the saint interred at the shrine is the supreme authority over all Sufi saints in the Indian subcontinent, and that no new Sufi saint could immigrate to the subcontinent without obtaining permission from the spirit of Hujwiri.[9]

Following the establishment of a shrine dedicated to Hujwiri, his tomb was visited by Muslims and non-Muslims in search of his blessings. Illustrious figures such as Baba Farid, Moinuddin Chishti, Nizamuddin Auliya, Dara Shikoh, and Allama Iqbal all paid obeisance to the shrine, and pledged allegiance to Hujwiri.[9] Prime Minister Nawaz Sharif was a frequent visitor to the shrine.

The shrine’s mosque was rebuilt in the 1980s utilizing a modernist architectural style.

Hujwiri’s teachings were critical of practices associated with South Asian Islam, such as the use of drugs, and dancing.[1] He also taught that Sufi saints were themselves still obliged to the demands of Islam, and so is revered by reformist Muslims who are critical of Sufi practice, as well as traditionalist Muslims who revere Sufi shrines.[1]

Qawwali performances are regularly held at the shrine. On special occasions, the shrine is decorated with lights, dinner is prepared for thousands of visitors, who also partake in dance while musicians play Sufi music for hours. At the boundary of the shrine, Muslim faithfuls recite the Qur’an, and pay tributes to the Prophet Muhammad. More info here

Mawlana Shaykh Muhammad Adil ق at the Badshahi Mosque being show the holy relics of Rasul’Allah ﷺ in Lahore, Pakistan.

The Badshahi Masjid (Punjabi and Urdu: بادشاہی مسجد‎, or “Imperial Masjid”) is a Mughal era masjid in Lahore, capital of the Pakistani province of Punjab,[1] Pakistan. The masjid is located west of Lahore Fort along the outskirts of the Walled City of Lahore,[2] and is widely considered to be one of Lahore’s most iconic landmarks.[3]

The Badshahi Masjid was built by Emperor Aurangzeb in 1671, with construction of the masjid lasting for two years until 1673. The masjid is an important example of Mughal architecture, with an exterior that is decorated with carved red sandstone with marble inlay. It remains the largest masjid of the Mughal-era, and is the second-largest masjid in Pakistan.[4] After the fall of the Mughal Empire, the masjid was used as a garrison by the Sikh Empire and the British Empire, and is now one of Pakistan’s most iconic sights. More info Badshahi Mosque

The Wazir Khan Mosque (Punjabi and Urdu: مسجد وزیر خان ‎; Masjid Wazīr Khān) is 17th century mosque located in the city of Lahore, capital of the Pakistani province of Punjab. The mosque was commissioned during the reign of the Mughal Emperor Shah Jahan as part of an ensemble of buildings that also included the nearby Shahi Hammam baths. Construction of Wazir Khan Mosque began in 1634 C.E., and was completed in 1641.[2]

Considered to be the most ornately decorated Mughal-era mosque,[1] Wazir Khan Mosque is renowned for its intricate faience tile work known as kashi-kari, as well as its interior surfaces that are almost entirely embellished with elaborate Mughal-era frescoes. The mosque has been under extensive restoration since 2009 under the direction of the Aga Khan Trust for Culture and the Government of Punjab,[3] with contributions from the governments of Germany, Norway, and the United States.[4] 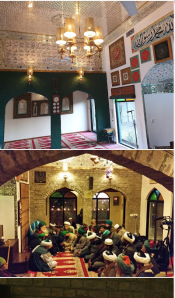 njabi Islamic philosopher and Sufi poet. His first spiritual teacher was Shah Inayat Qadiri, a Sufi murshid of Lahore. He was a Sayyid/Syed, a descendant of the Prophet Muhammad. More info:Maqam Baba Bhullay Shah:

Mawlana Shaykh Muhammad Adil (Q.S) presenting a a covering for the maqam of the great sufi saint and poet Baba Bulleh Shah (R) in Kasoor,

He Who is Stricken by Love by Bulleh Shah

He who wears the garb of Love

Gets blessings from above.

Soon as he drinks from this cup

No questions and no answers remain.

He who has the Beloved in his heart,

He is fulfilled with his Love.

No need he has for formality,

He just enjoys his ecstasy.

Farīd al-Dīn Masʿūd Ganj-i-Shakar (c. 4 April 1179 – 7 May 1266) was a 12th-century Punjabi Muslim preacher and mystic.[3] who went on to become “one of the most revered and distinguished Muslim mystics” of the medieval period.[4] He is known reverentially as Bābā Farīd or Shaikh Farīd by Muslims in Punjab, Pakistan or as Farīduddīn Ganjshakar. More info: Maqam Baba Farid

(The folk legend is that when Baba Farid ji went into the jungle to meditate, he took a piece of wood with him. And he would often chew it whenever he felt hungry as not to get distracted from meditation. In the above verse, he is pointing to the fact that one should follow the path of enlightenment to free oneself from sufferings of this world).

Anarkali remains one of the oldest surviving markets in South Asia, dating back at least 200 years and derives its name from the nearby mausoleum thought to be that of a courtesan girl named Anārkalī, who was ‘chased out of town’ by order of the Mughal Emperor Akbar for having a love affair with his son, Prince Salīm, who would later becomeEmperor Jahāngīr.  More info Old Anarkali

Mawlana Shaykh Muhammad Adil ق as they pay their respects at the maqam of Mawlana Shaykh Tahir Bandgi ق the Khalifa of Grandshaykh Imam-e-Rabbani Ahmad al-Faruqi al-Sirhindi ق in Lahore,

Baba Sain Mir Mohammed Sahib (c. 1550 – 22 August 1635), popularly known as Mian Mir or Miyan Mir, was a famous Sufi Muslim saint who resided in Lahore, specifically in the town of Dharampura (in present-day Pakistan). He was a direct descendant of Caliph Umar ibn al-Khattab. He belonged to the Qadiri order of Sufism. He is famous for being a spiritual instructor of Dara Shikoh, the eldest son of Mughal emperor Shah Jahan.[1][2] He is identified as the founder of the Mian Khel branch of the Qadiri order. His younger sister Bibi Jamal Khatun was a disciple of his and a notable Sufi saint in her own right. 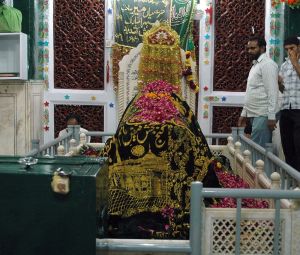 The Shalamar Gardens (Punjabi, Urdu: شالامار باغ‎, romanized: Shālāmār Bāgh), also known in English as the Shalimar Gardens, are a Mughal garden complex located in Lahore, capital of the Pakistani province of Punjab. The gardens date from the period when the Mughal Empire was at its artistic and aesthetic zenith,[1] and are now one of Pakistan’s most popular tourist destinations.

The Shalamar Gardens were laid out as a Persian paradise garden intended to create a representation of an earthly utopia in which humans co-exist in perfect harmony with all elements of nature.[2] Construction of the gardens began in 1641 during the reign of Emperor Shah Jahan,[2] and was completed in 1642.[3] In 1981 the Shalamar Gardens were inscribed as a UNESCO World Heritage Site as they embody Mughal garden design at the apogee of its development.[1]