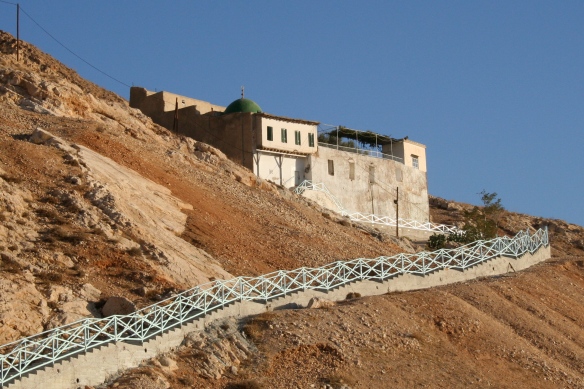 Maqam al-Arba’in is a shrine on Jabal Qasiyun built on the site where the Biblican and Koranic murder of Abel son of Adam by his brother Cain is believed to have taken place. Within the cave is an image of a mouth in the rock, said to have been formed when the cave cried out at the awful deed.

Next to this is a small shaft into the mouth of the mountain which is believed to be, according to local tradition, the place from which the spirit of Damascus’ 40 saints descends every night and ascends with the break of dawn. The mihrabs (prayer niches) on the upper floor of the shrine are believed to be where the 40 saints pray the night vigil prayers every night. Two other sacred mihrabs are located on the lower level of the shrine and are believed to be the spots at which Abraham and Al-Khidr prayed respectively during their flight through Damascus. Al-Khidr is a mythical Islamic figure whose identity remained undisclosed, but whose relationship to Moses and his unquestionable divine wisdom is mentioned in the Koran’s famous Surat Al-Kahf.

On the slopes of Jabal Qasiun is a cave steeped in legend. It is said to have been inhabited at one point by the first human-being, Adam; and there are various stories told about Ibrāhīm (Abraham), and ‘Īsā (Jesus) also having prayed in it. It is mentioned however in Medieval Arab history books as having been the place where Qābīl (Cain) killed Hābīl (Abel).] It was known for hundreds of years as a place where prayers were immediately accepted, and especially in times of drought rulers of Damascus would climb to the cave and pray for rain. Because of the murder that took place there, claimed to be the first committed, it is called Maghārat al-Dam (the Cave of Blood).

According to Sunni Muslims, Mount Qasioun is the site of the miḥrābs (prayer niches) of the 40 arch-saints, known as the Abdāl, who are said to pray the night vigil prayers every night. A small mosque has been built over the Cave of Blood containing these miḥrābs.

Further down the mountain from the ‘Cave of Blood’, there was another cave known as Maghārat al-Jūˁ (the Cave of Hunger). Stories about this cave are somewhat confused. Some say that forty saints died there of hunger; al-Harawī, however, who lived in the 13th century, writes that it is said that forty prophets died there of hunger.] At present, the cave has been concealed by surrounding houses, but that spot is called al-Juyūˁīyah (Roughly ‘the Place of the Hungry’).

On another flank of the same mountain is yet another cave, which has come down in local legend as being the cave of the Seven Sleepers, mentioned in early Christian sources, as well as in the Quran,] where they are known as the Aṣḥāb al-Kahf (Companions of the Cave). This is rather dubious, however, and it is only one of many caves in this part of the world that share the claim. A madrassah has been built over the cave, but pilgrims are still granted access.

“Thirdly there is a large cavern at the top of the mountain which is called by the name of Adam, and surmounted by a building. Somewhat below it is a cave known as the cave of Hunger; the story is told that seventy of the prophets (on them be peace) took refuge in it having with them only one loaf and it continued to circulate amongst them as each preferred to give it to his neighbor until they all died together (God bless them). Over this cave also is a regularly constructed mosque and in it lamps are kept burning night and day…

ON THE RIGHT IS WERE THE MUDER TOOK PLACE AND ON THE LEFT ARE 3 HOLES WERE THE ABDALS COME FROM IN SPIRTUAL FROM TO PRAY….. 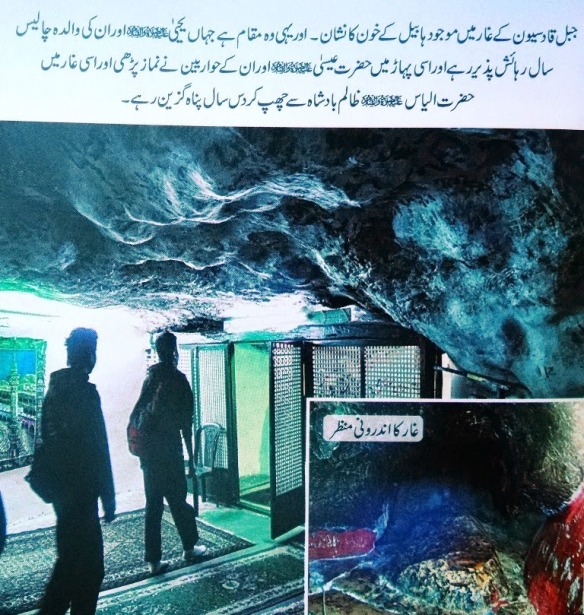 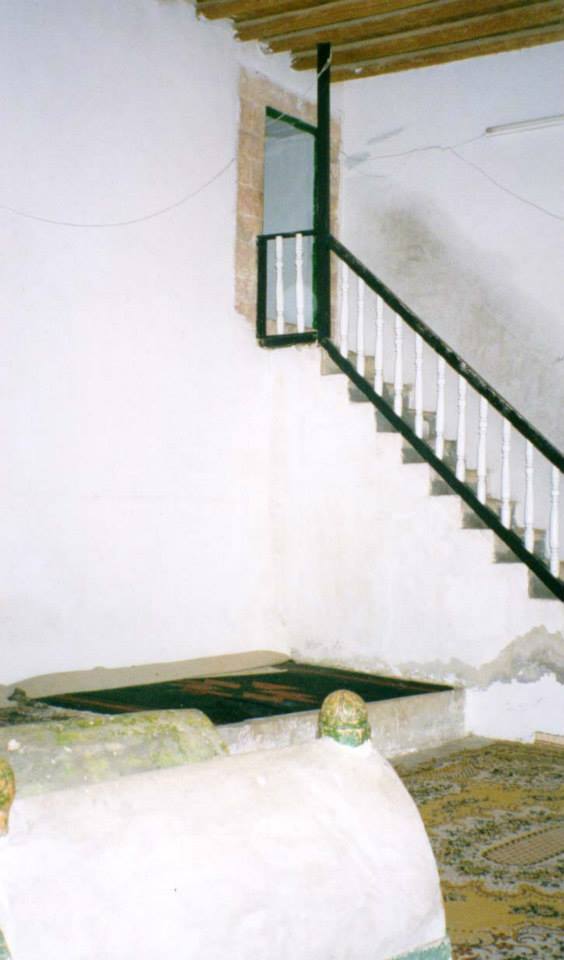 This Suhbah explains the blessings of Damascus (in Syria), also known as Sham. There is a mountain there called Jabbal Qasiyun, on which Maulana’s house is located. GrandShaykh’s (qs) Maqam and Mosque are but a few metres from Maulana’s blessed house on the mountain.

This Suhbah can only be watched at http://www.Saltanat.org , choose from the menu on the right, Şam Hakkında 8th nov 2010 . There is a CC button next to the Volume control at the bottom of the screen to choose choose subtitles in eight languages, choose from Arabic, Bahasa Indonesia/Melayu, German, English, Spanish, Italian, Russian and Turkish. Şam Hakkında Link: http://saltanat.org/videos.php?id=644 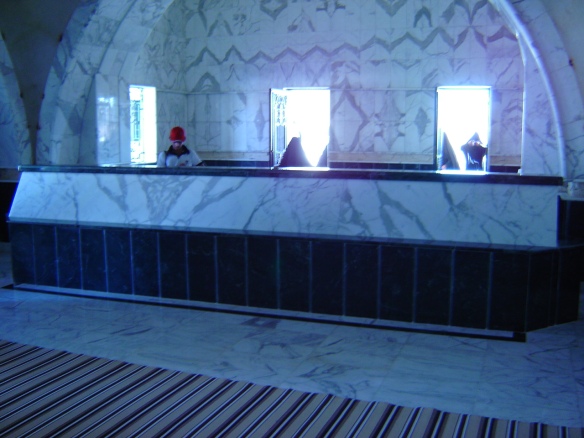