Mawlānā retells the story of the Pied Piper but with a beautiful ending. In such a way, Allāh gives the Awliyā’ a divine music that no one can resist.

The Pied Piper of Hamelin (German: Rattenfänger von Hameln, also known as the Pan Piper or the Rat-Catcher of Hamelin) is the titular character of a legend from the town of Hamelin (Hameln), Lower Saxony, Germany. The legend dates back to the Middle Ages, the earliest references describing a piper, dressed in multicolored (“pied”) clothing, who was a rat-catcher hired by the town to lure rats away[1] with his magic pipe. When the citizens refuse to pay for this service, he retaliates by using his instrument’s magical power on their children, leading them away as he had the rats. This version of the story spread as folklore and has appeared in the writings of Johann Wolfgang von Goethe, the Brothers Grimm, and Robert Browning, among others.

The Pied Piper of Hamelin: The rats/mices that infest the town are symbolic of all the sins, corruption and false beliefs that plague the people. The Pied Piper is a man who comes to show the people the path to the light. He asks for a vast reward since he knows that this is the supreme test of the townspeople. If they have listened to his message, they will have no more need of their gold because they will have lost their materialistic greed and they will no longer worship money. They will be happy to pay him the agreed sum (symbolising that they have progressed from the materialistic to the spiritual plane). The Piper succeeds in driving out the rats (the moral pollution) from the community, but it is a short-term success. When the time comes for the townspeople to pay the Piper, they are still wedded to their old greed and materialism and they don’t give him his due. The Pied Piper realises that these adults are incapable of changing their wicked ways, so he leads the children to salvation instead, ensuring that they are cut off forever from the malignant influence of the adults. This is symbolised by the magic mountain opening (the Koppenberg Mountain), the children going inside and then vanishing forever from the knowledge of the townspeople. The only child who fails to gain admission to paradise is the crippled boy (symbolising that he has been too badly injured by the beliefs and corruption of the townspeople to take the decisive step to Knowledge). 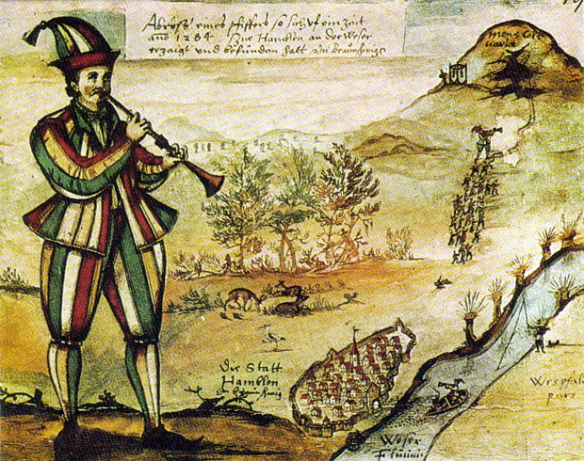